The physiologic mechanism of erection of the penis involves a release of nitric oxide (NO) in the corpus cavernosum during sexual stimulation.

Sildenafil is rapidly absorbed after oral administration, with a mean absolute bioavailability of 41% (range 25-63%). Their pharmacokinetics is dose-proportional over the recommended dose range. It is eliminated predominantly by hepatic metabolism (mainly cytochrome P450 3A4) and is converted to an active metabolite with properties similar to the parent, sildenafil. Concomitant use of potent cytochrome P450 3A4 inhibitors (e.g erythromycin, ketoconazole, itraconazole) as well as the nonspecific CYP inhibitor, cimetidine, is associated with increased plasma levels of sildenafil (see dosage and administration). Both sildenafil and the metabolite have terminal half-lives of about 4 hours.

Sildenafil is rapidly absorbed. Maximum observed plasma concentrations are reached within 30 to 120 minutes (median 60 minutes) of oral dosing in the fasted state. When Sildenafil is taken with a high-fat meal, the rate of absorption is reduced, with a mean delay in T max of 60 minutes and a mean reduction in C max of 29%. The mean steady-state volume of Distribution (Vs) for sildenafil is 105 L, indicating Distribution into the tissues. Sildenafil and its major circulating N­desmethyl metabolite are both approximately 96% bound to plasma proteins. Protein binding is independent of total ED drug concentrations. Based upon measurements of sildenafil in semen of healthy volunteers 90 minutes after dosing, less than 0.001% of the administered dose may appear in the semen of patients.

Sildenafil is cleared predominantly by the CYP3A4 (major route) and CYP2C9 (minor route) hepatic microsomal isoenzymes. The major circulating metabolite results from N-demethylation of sildenafil and is itself further metabolized. This metabolite has a PDE selectivity profile similar to sildenafil and an in vitro potency for PDE5, proximately of the parent drug. Plasma concentrations of the tablet are approximately 40% of those seen for sildenafil so that the metabolite accounts for about 20% of sildenafil’s pharmacologic effects. After either oral or intravenous administration, sildenafil is excreted as metabolites predominantly in the feces (approximately 80% of administered oral dose) and to a lesser extent in the urine (approximately 13% of the administered oral dose). Similar values for pharmacokinetic parameters were seen in normal volunteers and in the patient population, using a population pharmacokinetic approach.

V-Oral is indicated for: Treatment of erectile dysfunction patient may take ED drugs 30 minutes to 4 hours before sexual activity. Based on effectiveness and tolerance by the patient, may increase dose to maximum single dose of 100 mg or decrease dose to 50 mg. A maximum recommended dosing frequency is once daily.

Contraindicated in patients using organic nitrates and in those hypersensitive to drug or its components. Use cautiously in patients who have or can possibly had any MI, CVA, or life-threatening arrhythmias within the past 6 months; those with a history of cardiac failure, coronary artery disease, or uncontrolled high or low blood pressure; those with anatomic deformation of the penis; and those predisposed to priapism (sickle cell anemia, multiple myeloma, leukemia), retinitis pigmentosa, bleeding disorders, or active peptic ulcers.

The evaluation of erectile dysfunction should include a determination of potential underlying causes and the identification of appropriate treatment following a complete medical assessment. Before prescribing V-oral strips, it is important to note the following:

Cardiovascular risk factors: Prior to initiating any erectile dysfunction treatment, physicians should consider the cardiovascular status of their patients, since there is a degree of cardiac risk associated with sexual activity. V-Oral has vasodilator properties, resulting in mild and transient decreases in blood pressure.

Priapism: Agents for erectile dysfunction treatment, including V-Oral, should be used with caution in patients with anatomical deformation of the penis (such as angulation, cavernosal fibrosis or Peyronie’s disease), or in patients who have conditions which may predispose them to priapism (such as sickle cell anemia, multiple myeloma or leukemia).

Effects on vision: Cases of visual defects have been reported spontaneously in connection with the intake of V-Oral and other PDE5 inhibitors. Cases of non-arteritic anterior ischaemic optic neuropathy, a rare condition, have been reported spontaneously, and in an observational study in connection with the intake of sildenafil and other PDE5 inhibitors. Patients should be advised that in the event of any sudden visual defect, they should stop taking V-Oral and consult a physician immediately.

Concomitant use with alpha-blockers: Caution is advised when V-Oral Strips is administered to patients taking an alpha-blocker, as the co-administration may lead to symptomatic hypotension in a few susceptible individuals. This is most likely to occur within 4 hours post Voral dosing.

Effect on bleeding: Studies with human platelets indicate that V-Oral potentiates the anti aggregator effect of sodium nitroprusside in vitro. There is no safety information on the administration of sildenafil to patients with bleeding disorders or active peptic ulceration.

Women: Sildenafil is not indicated for use by women.

5 Interaction with other medicinal products and other forms of Interaction:

Abnormal Vision: Mild and to transient, predominantly vision, but also increased sensitivity to light or blurred vision. In these studies, only one part is discontinued due to abnormal vision. Other adverse reactions occurred at a rate of >21’Q, imt equally common on placebo: respiratory tract infection, back flu syndrome, and arthralgia. In fixed-dose studies, dyspepsia (17%) and abnormal vision (11%) were more common at 100 rag than at lower doses. At doses above the recommended dose range, adverse events were similar to those detailed above but generally were reported more frequently. The following events occurred in <2% of patients in control clinical trials; a causal rel’:,.  Sildenafil is uncertain. Repc..–ted events include those plausible relations to drug use; omitted are minor events too imprecise to be meaningful:

In studies with healthy volunteers of a single dose, adverse events were similar to those seen at lower dose: incidence rates and severities were increased. In cases of overdose, standard supportive measures should be adopted as required. Penal dialysis is not expected to accelerate clearance as sildenafil is highly bound to plasma proteins and it is not eliminated in the urine.

Always take this medicine exactly as your doctor or pharmacist has told you. The recommended starting dose is 50 mg and extend to . 100 mg. You should not take V-Oral more than once a day. Once should take V-Oral about 0.5 to 4 hours before you plan to have sex. You should keep the strip over the tongue as a whole and it dissolves within 60 sec without the aid of any water. If you feel the effect of Sildenafil is too strong or too weak, talk to your doctor or pharmacist. Sildenafil will only help you to get an erection if you are sexually stimulated. The amount of time Sildenafil takes to work varies from person to person, but it normally takes between half an hour and one hour. You should not take more Strips than your doctor tells you to. Contact your doctor if you take more Strips than you should. If you have any further questions on the use of this medicine, ask your doctor or pharmacist.

Store at a temperature below 25’C protect from moisture, Do not use if the seal is open.

Shelf Life: 3 years from the date of Manufacturing.

7 Sachets packed in one inner with the package insert. 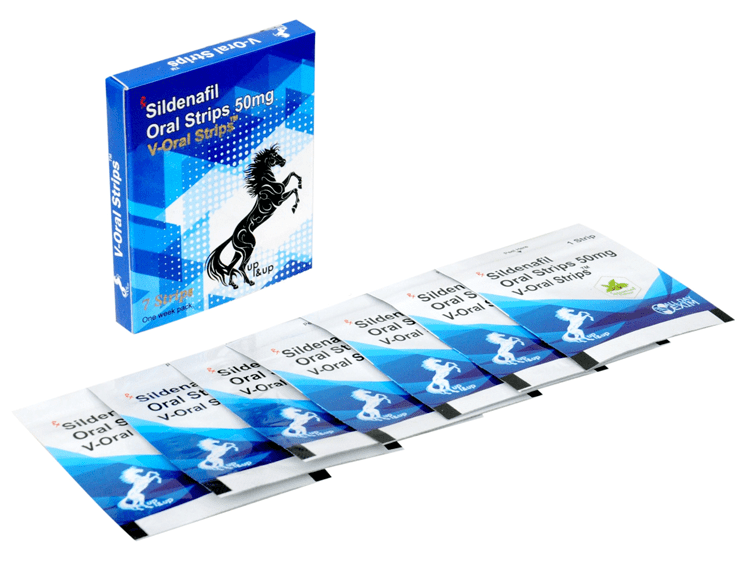